More sensitive than the predecessor (Garrett Pro-Pointer® detector), fully submersible to a maximum depth of 3 meters thanks to the IP68 standard and effective in any terrain. Simply versatile in locating and precisely identifying metallic objects, loved by specialists and hobbyists.

The power replacement is fast and does not require any tools.

The intense orange color of the Garrett Pro-Pointer® AT detector is no accident. The detector is visible from afar underwater or in low light, which makes it easier to work and find it if it is lost. 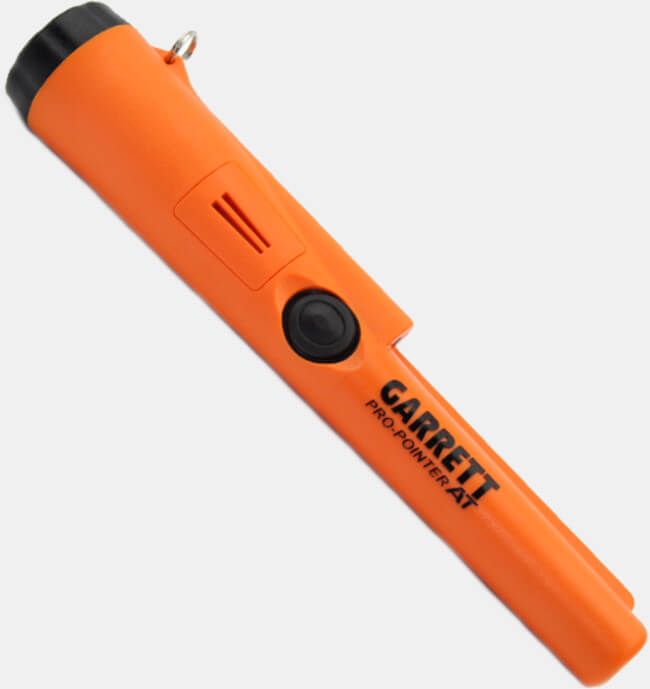 Alarm if lost After 5 minutes without being active, the detector starts to emit a loud alarm signal, making it easier to find it. After 60 minutes, it turns off to save battery life.

Big button It can be felt even by a thick glove

Loop to attach a leash

Tip for precise indication of a metallic object with small dimensions

Built-in LED flashlight supports work in dark spaces, and the measure in centimeters and inches helps determine the depth at which the detected object is located. Garrett Pro-Pointer® AT is used:

Garrett Pro-Pointer® AT has a patented technology of variable frequency sound and vibration signal during detection depending on the distance from the object, which facilitates its localization.

Garrett PRO-POINTER® AT also meets the rigorous standards of electromagnetic compatibility and safety: